Whether you prefer your superhero adventures to play out on the big screen, streaming on your phone or prefer good, old-fashioned comic books, there’s a whole lot of Marvel content headed your way in 2023. The MCU is kicking off Phase 5, Sony has new live-action and animated Spider-Man movies in the works and Marvel is celebrating the 60th anniversary of one of the biggest franchises in the world.

Here’s a breakdown of everything you can expect from marvel in 2023, from movies to TV series to comics to video games.

2023 is going to be a pivotal year for the Marvel Cinematic Universe, as it marks the start of Phase 5 and the point where the MCU shifts from introducing new heroes to laying the foundation for Avengers: The Kang Dynasty and Avengers: Secret Wars.

It all starts with Ant-Man and the Wasp: Quantumania in February. This latest sequel not only sees a teenage Cassie Lang (now played by Kathryn Newton) suit up alongside her dad as Stature, it’s also the first MCU movie to feature Jonathan Majors’ Kang the Conqueror as a villain. It’s by no means going to be the last time we see him.

The next MCU movie on the docket is the final entry in the Guardians of the Galaxy series, hitting theaters on May 5. Expect a lot of tearful goodbyes as director James Gunn bids farewell to the franchise and the MCU as a whole.

Guardians Vol. 3 follows Star-Lord (Chris Pratt) and his dysfunctional family unit as they search for the missing Gamora (Zoe Saldana) and butt heads with the brilliant mad scientist known as The High Evolutionaryc (Chukwudi Iwuji). This sequel will also introduce Will Poulter’s Adam Warlock, though how he factors into a post-Infinity War MCU is anyone’s guess.

The Marvels rounds out the trio of new MCU movies in 2023. Hitting theaters on July 28, this Captain Marvel sequel teams Brie Larson’s heroine with Teyonah Parris’ newly super-powered Monica Rambeau and Iman Vellani’s Ms. Marvel. We don’t know much about the plot of The Marvels yet, but we’re already on board for all the inevitable scenes of Kamala geeking out over meeting her superhero idol.

Expect plenty more MCU series on Disney+ over the course of 2023. Both What If…? and Loki are getting second seasons, with the latter exploring the fallout of Season 1’s shocking finale and the death of He Who Remains.

Alaqua Cox’s Echo is spinning out into her own series in 2023. Both Vincent D’Onofrio’s Wilson Fisk and Charlie Cox’s Matt Murdock are expected to appear, making this series a perfect appetizer for the upcoming Daredevil: Born Again.

Dominique Thorne’s Ironheart is also getting a spinoff show in 2023. Set after Black Panther: Wakanda Forever, Ironheart brings Riri Williams back to her hometown of Chicago and pits her against the superhuman crook known as The Hood (Anthony Ramos).

And finally, we’re expecting Agatha: Coven of Chaos to cap off the MCU’s 2023 lineup. This series stars Kathryn Hahn as Agatha Harkness and is probably the closest thing we’ll ever see to WandaVision Season 2. But will Wanda herself appear? We do know the series also stars Aubrey Plaza and Joe Locke, with the latter rumored to be playing an older version of Wanda’s magically inclined son, Wiccan.

Sony is still in the Marvel movie business, even if Morbius didn’t make the strongest case for the so-called “Sony’s Spider-Man Universe” in 2022. But the good news is that the future is looking much brighter next year.

Spider-Man: Across the Spider-verse is finally arriving in theaters on June 2. This sequel to 2018’s critically acclaimed Into the Spider-Verse promises to up the ante with several more Spider-heroes. That includes Issa Rae as Spider-Woman and Daniel Kaluuya as Spider-Punk.

This time around, Miles and his multiversal friends are battling The Spot (Jason Schwartzman), though our Spider-Sense tells us he isn’t the only villain threatening these worlds. Don’t forget, Across the Spider-Verse leads directly into Spider-Man: Beyond the Spider-Verse in 2024.

As for Sony’s live-action lineup, Kraven the Hunter is the next iconic villain to get his own live-action movie. Aaron Taylor-Johnson stars as Sergei Kravinoff, with Ariana DeBose playing Calypso and Fred Hechinger playing Sergei’s half-brother Chameleon. As usual, we’re not expecting Spidey himself to appear, but expect some sort of connection to the Venom and Morbius movies.

2023 marks the 60th anniversary of the original X-Men #1, and you can expect Marvel to throw plenty of love at our favorite mutants over the course of the year.

That includes a heavy dose of ‘90s nostalgia with the debut of X-Men ‘97 on Disney+. This animated series picks up where the original X-Men cartoon left off more than 25 years ago. Magneto is in charge of the X-Men, and a whole host of enemies both new and old are looking to ruin Charles Xavier’s dream. Many of the surviving voice actors are returning for the new series, which looks to be geared toward an older audience this time around. We’ll find out whether it can truly recapture that ‘90s mojo when the series debuts in Fall 2023. 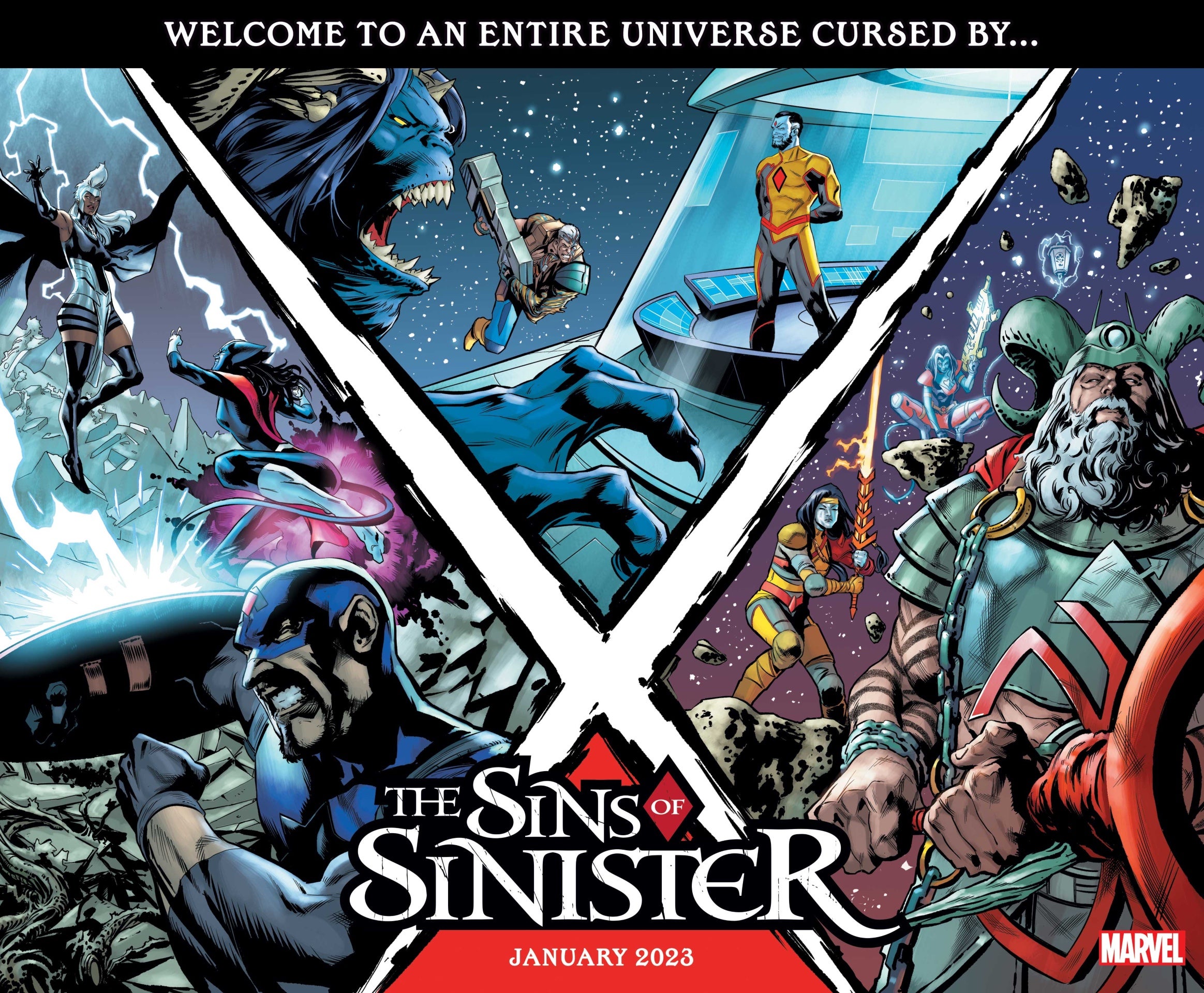 On the comic book side of things, Marvel is continuing to bet big on the X-Men line in 2023, with ongoing series like X-Men, Immortal X-Men and X-Men Red exploring the continued fallout of the huge changes brought about back in 2019’s House of X and Powers of X. We can expect two major X-Men crossovers in the early part of the year. Dark Web pits Spider-Man and the X-Men against the tag-team duo of Madelyne Pryor and Ben Reilly, the two angriest clones in the Marvel Universe. Then, Sins of Sinister jumps into the future of the Marvel U. to explore what happens when this scheming scientist finally betrays the nation of Krakoa. 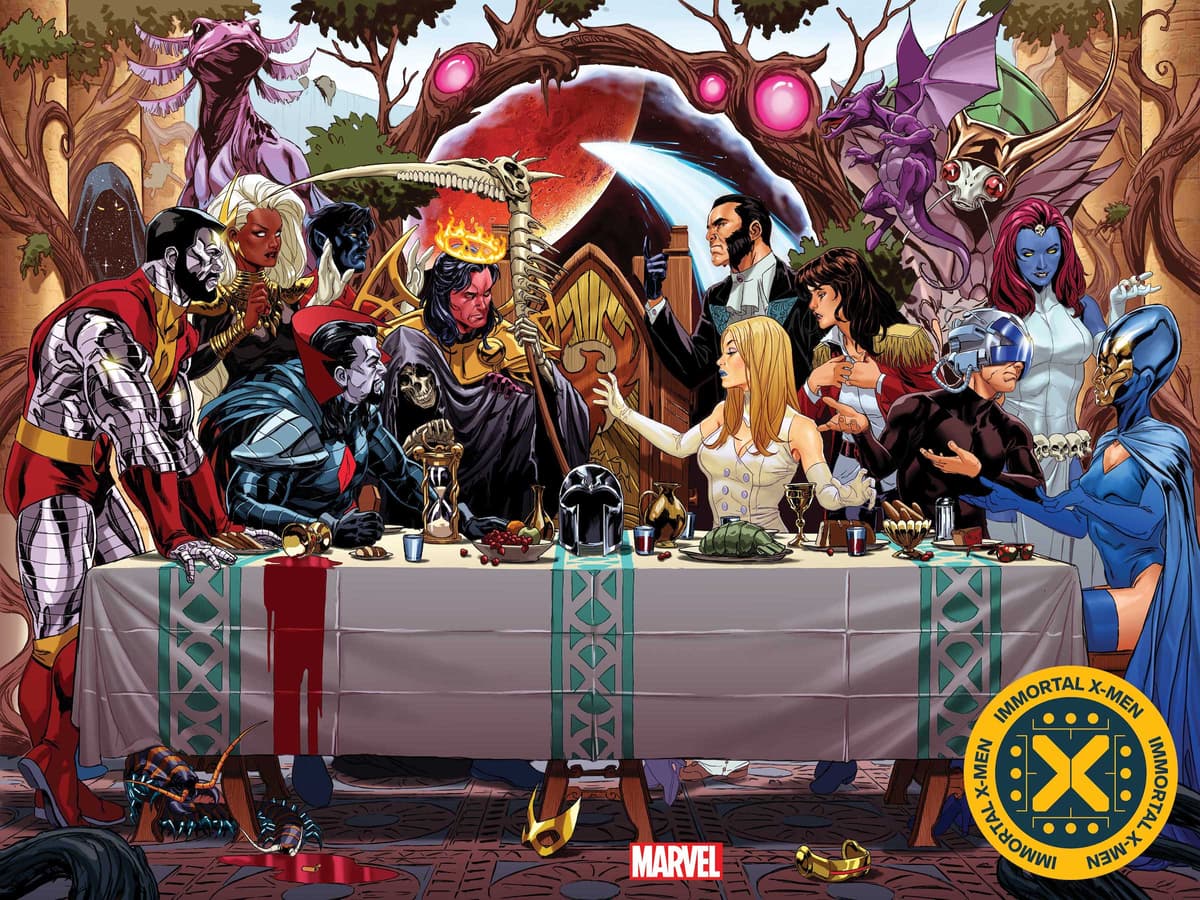 But the biggest X-Men comic of 2023 is undoubtedly Fall of X. We don’t know much about Fall of X other than that it’s coming in the latter half of the year. But after watching the Krakoan dream slowly collapse in on itself due to in-fighting and betrayal, it sounds like things are about to come crashing down hard for the X-Men. Will there still be a Krakoa when the dust settles?

That’s not to say Marvel Comics is focused entirely on the X-Men in 2023. It’s shaping up to be a transformative year for a number of long-running franchises, including Spider-Man. 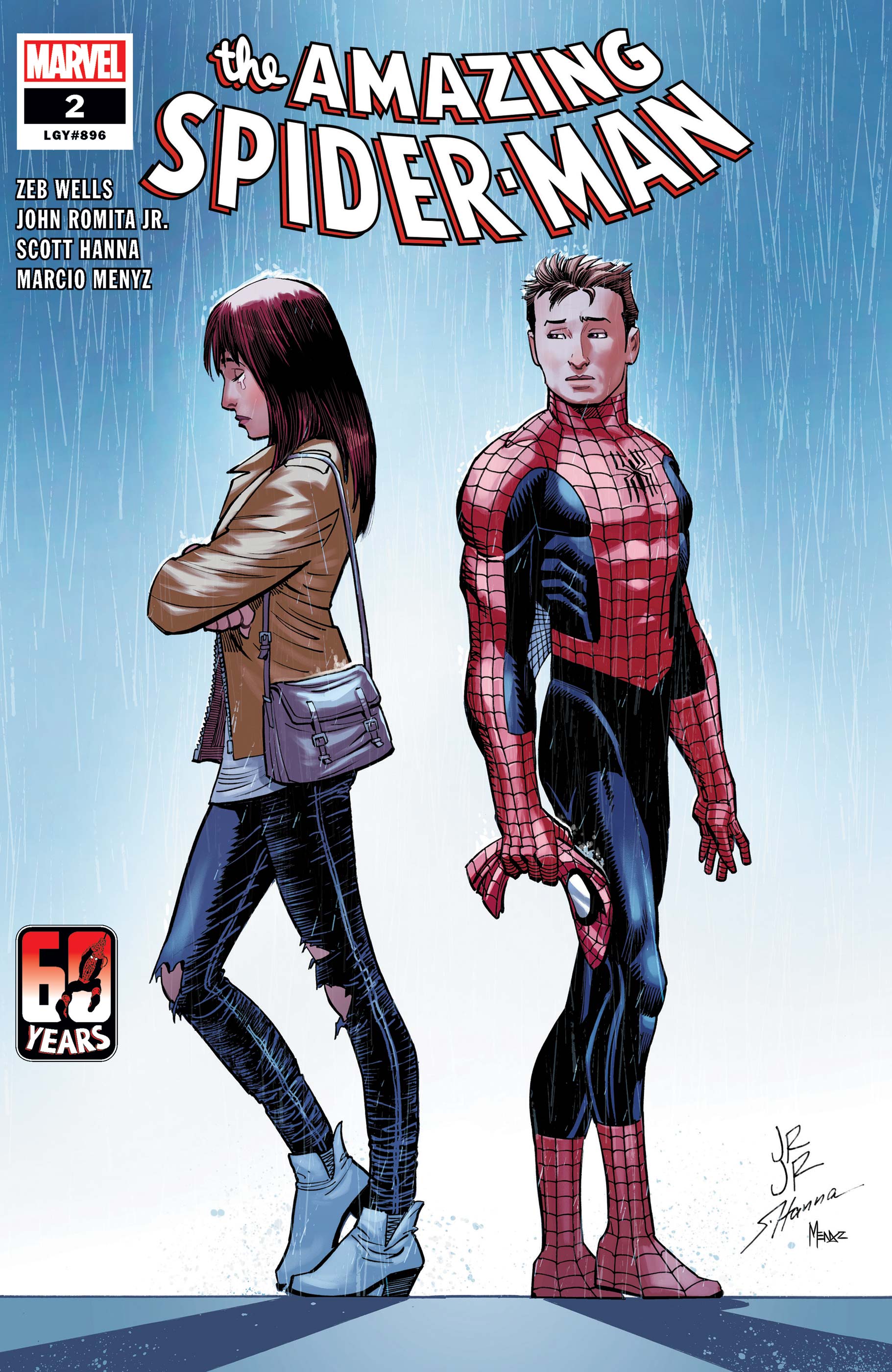 Once the dust of Dark Web settles, Amazing Spider-Man readers are finally going to get some answers regarding one of the biggest mysteries of 2022. What exactly did Peter Parker do to alienate all his friends and loved ones? Why did Mary Jane break things off yet again? Writer Zeb Wells will be revealing all in the new year.

There’s also another Spider-Man crossover brewing for Summer 2023, this time reuniting Spidey with his old frenemy Venom. Apart from the title – Summer of Symbiotes – we don’t know much about this storyline just yet, but it sounds like just the ticket for anyone who can’t get enough symbiotes. 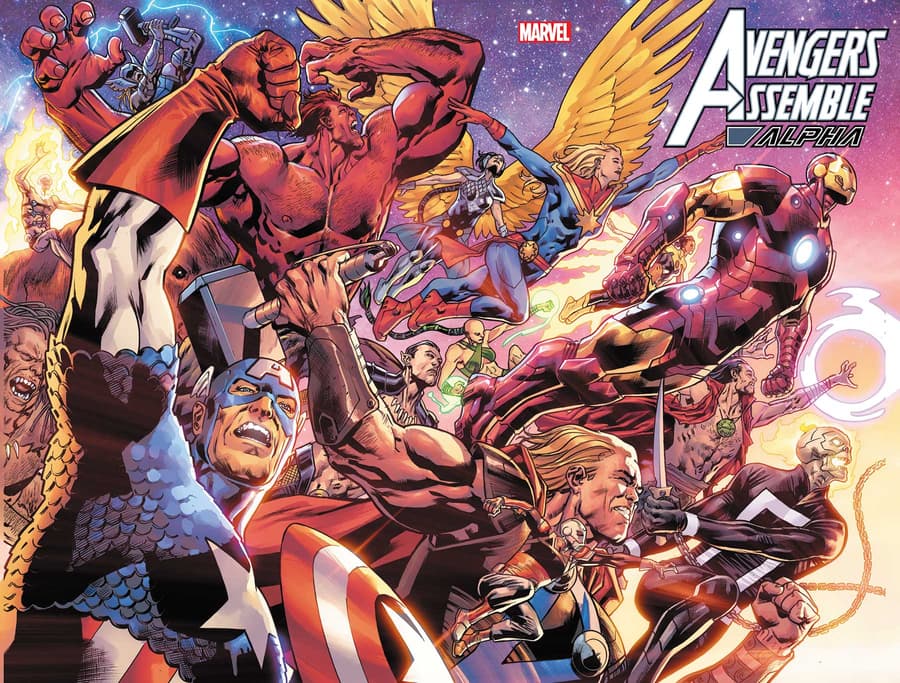 Elsewhere, Jason Aaron will be wrapping up his five-year run on the flagship Avengers series this spring, as Avengers from across the multiverse unite to take on Mephisto. That epic saga ends in April, and it’s a safe bet that Marvel will be announcing a new, monthly Avengers comic from a brand new creative team. We don’t envy anyone having to follow in Aaron’s footsteps.

Marvel is also gearing up for Cold War, a crossover between the two Captain America books that deals with the rising threat of an organization known as the Outer Circle. Expect plenty of big developments in the months to come, including new revelations about the origins of Cap’s shield and the return of Nomad.

And finally, we’d be remiss if we didn’t mention Scarlet Witch, a new monthly series that introduces a killer new costume and a very different status quo for Wanda Maximoff. Not only is she opening her own witchcraft store, Wanda is about to join forces with the one and only Darcy Lewis, who finally makes the jump from the MCU to Marvel’s comic book universe.

2023 isn’t shaping up to be the biggest year for Marvel in the video game arena, but there is one big gun to keep an eye on next year.

Marvel’s Spider-Man 2, the sequel to Insomniac’s smash-hit 2018 game, is currently slated for release in the fall. But as we've seen again and again in this COVID era, no release date is set in stone.

Spider-Man 2 allows players to take control of both Peter Parker and Miles Morales. The game introduces venom to the Insomniac universe, voiced by Candyman himself, Tony Todd. And based on the way the first game ended, we’re guessing it’s actually Harry Osborn underneath those big muscles and massive jaws.

While there’s zero chance of Insomniac releasing their Wolverine game next year, we are hoping to get a better look at their latest Marvel project.

The same goes for the other mysterious Marvel games in the pipeline, EA’s Iron Man and Skydance’s Captain America and Black Panther game. Hopefully, we can end the year knowing a lot more about what to expect from these major Marvel games.

Which Marvel project has you most excited in 2023? What the heck is Fall of X, anyway? Sound off in the comments.

Jesse is a mild-mannered staff writer for IGN. Allow him to lend a machete to your intellectual thicket by following @jschedeen on Twitter.